DATAQ Instruments was recently mentioned in Evaluation Engineering magazine‘s special report on data acquisition systems. The feature focused on applications in machine condition monitoring, which is an area that is very popular for users of our equipment. So, we thought we’d publish an overview of it here for our readers. The specific application was monitoring the condition of a die cushion.

As its name implies, a die cushion is a device attached to a metal press to absorb and distribute the force of the process. This activity serves to ensure a more uniform pressure over the die blank and throughout the press’s stroke. When properly configured, a die cushion enhances yield, quality, and repeatability of produced parts. 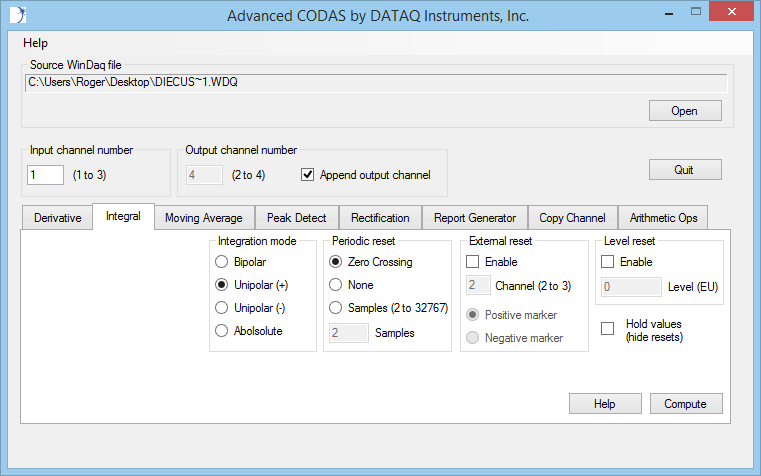 Figure 1 — The Advanced CODAS integration utility is only one of many analysis functions that may be applied to WinDaq-acquired data. Each is an easy-to-use, non-programming point-and-click utility.

Our customer is a press manufacturer, and wanted to qualify the function of a die cushion in a particular application. The die cushion was a hydraulic device, so a pressure sensor with a 4-20 mA output was fitted to it and connected to a DI-718B-U data acquisition system running WinDaq data acquisition software. Conditioning and excitation for the sensor was provided by a DI-8B42-01 amplifier, that was installed inside the DI-718b instrument, resulting in a compact and powerful data acquisition solution. 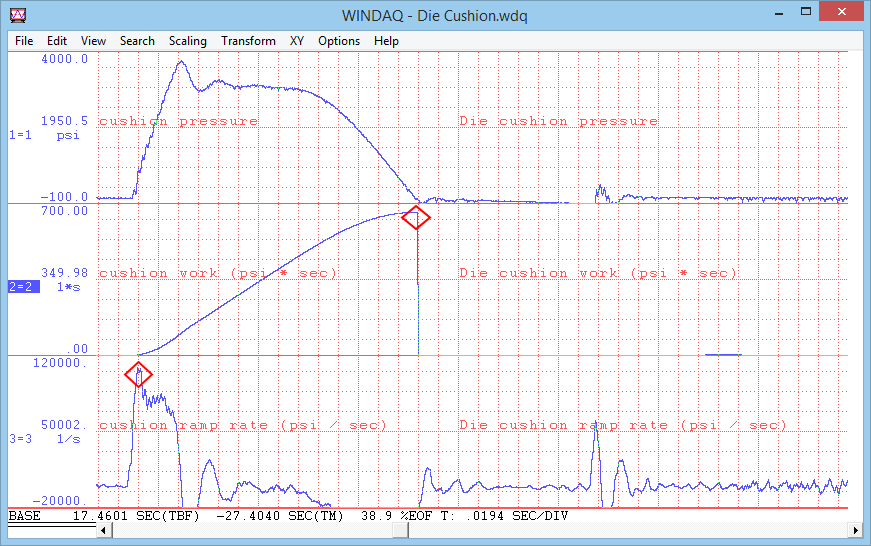 Only one measurement was acquired by the instrument, but a pressure curve by itself was not enough to qualify die cushion condition. To gain the necessary insights, post processing was required and supplied by DATAQ Instruments’ Advanced CODAS waveform analysis software. That package allowed meaningful post-acquisition analysis by generating two calculated channels derived from the original pressure waveform: its integral and derivative. 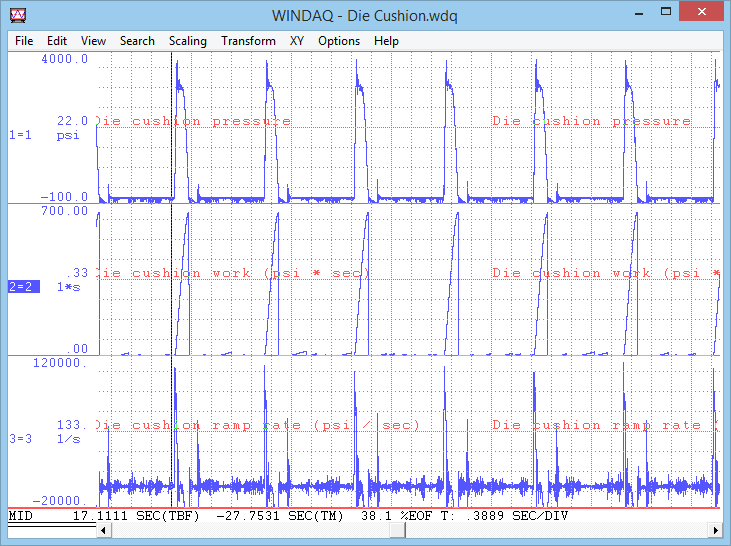 The utility of the integrator facility provided by Advanced CODAS is enhanced by the multiple reset methods that can be configured. In this situation, pressure always returned to zero after a press cycle, so the integrator was configured to reset upon zero crossing of the pressure waveform, which ensured automatic and meaningful measurements per press cycle.

The total amount of work done by the die cushion is only half of the story. Also of great interest is the stress applied to the device during press cycles. This quantity is revealed by another Advanced CODAS utility that differentiates the pressure waveform with respect to time. Scaled in units of psi/second, this result quantifies the abuse absorbed by the die cushion, caused mostly by large, initially applied pressures. Since derivatives tend to produce noisy results, Advanced CODAS allows derivatives to be calculated over adjustable window sizes. The derivative of the pressure waveform discussed here responded well to a window size of 7.

Putting It All Together

Figure 1 shows the Advanced CODAS configuration application where various calculation functions and options are selected and applied to acquired data. It features a point-and-click, non-programming user interface for ease of use. Shown is the Integration screen with all of its reset methods.

Figure 2 is a screen capture of only one cycle of the analysis result. The top-most waveform is acquired die cushion pressure in units of psi. The middle waveform is the integral of pressure, reset upon zero-crossing of the pressure waveform. Its units are psi-seconds, and the total amount of work performed for this single press cycle is the peak value shown in the diamond, about 620 psi-sec. The bottom waveform of Figure 2 is the derivative of pressure. In units of psi/second, the peak value of approximately 104,000 psi/sec is shown in the diamond and represents the most extreme stress experienced by the die cushion in that particular cycle.

It is important to note that Advanced CODAS is a waveform analysis package that produces a running calculation. Figure 3 is a more compressed view of the analysis showing that calculations are applied automatically across multiple press cycles.