How To Eliminate Noise in Data Logger and Data Acquisition Measurements

(Note: This is a consolidated version of a six-part series on signal noise reduction in data logger and data acquisition systems.)

This happens almost daily: A customer contacts our support group to complain of noise on his measurement. Almost invariably a comparison is made between the output of his PC-based product and a connected DVM. The DVM shows a stable reading while the PC-connected measurement “is jumping all over the place.”

While there’s a slim chance that the PC-based instrument is to blame, that can only be true if the front end has been damaged in some manner. While not perfect, analog front ends on data acquisition and logger products are designed to inject only very small amounts of noise as a percentage of full scale measurement range.

What should you do if your setup exhibits a large amount of noise, so much so that it’s difficult to discern the true measured value? This series makes some suggestions that will help you identify and eliminate the problem. In this first part we’ll show you how to ensure that the instrument is functioning properly and is not the source of the noise. In subsequent posts we’ll dig progressively deeper into field wiring to expose some common problems that can manifest themselves.

So, is it the instrument, or not? Follow these steps to find out:

Next time, we’ll delve into common field wiring issues that can and do produce more noise than a heavy metal concert.

In the premier edition of this series I talked about how you should initially approach noise elimination. The first step is to ensure that noise is a significant percentage of the full scale range of the analog channel, and then I explained a simple test to ensure that the instrument is not the noise source. If you’ve gotten this far I can assume that signal noise is significant, and the instrument is not defective.

Your next step is to look up the isolation specification of the instrument. Note that if you are under the impression that an instrument with differential analog inputs means that it is also isolated, you need to read this application note before proceeding. Differential and isolated analog inputs are not synonymous, and unless the specifications for the instrument state clearly that its inputs are isolated it most likely is not, regardless of its single-ended and/or differential configuration options. This edition of the Noise Elimination series assumes that you have an isolated instrument. I’ll deal with non-isolated instruments in later editions, since the subject becomes more complex in this situation.

So, you have read its specifications and determined that you have an isolated instrument. That’s great because noise-inducing common mode voltages (CMVs) can be largely, but not completely ignored. To absolutely verify that a common mode voltage is not a problem start by answering these questions:

If the measured value exceeds this spec then you have found the source of your noise, and you’re fortunate that the instrument still functions. Your two options are to lower the CMV if possible, or replace the instrument with one that provides a higher isolation spec.

In the next edition I’ll discuss CMV frequency and how this can destroy the best instrument isolation barriers.

We’ve covered evaluating noise magnitude to see if noise elimination is worth the time and effort, and a procedure to test the instrument for proper operation. In part 2, the concept of a common mode voltage (CMV) was introduced, and how a CMV can disrupt the operation of even isolated instruments if it’s too large. Here I’ll continue the discussion of common mode voltages in isolated instruments, focusing not on its magnitude, but on its frequency.

Most of the CMV situations you’ll encounter revolve around 50/60 Hz power, or maybe 100/120 Hz in the presence of florescent lighting. These are low frequency CMVs that won’t interfere with the ability of an isolation barrier to perform. There are applications however that can wreak havoc on an isolation barrier; in the presence of high frequency noise generated by a welding machine or some other piece of industrial equipment, for example.

As the frequency of the CMV increases, the effectiveness of the isolation barrier decreases. This is due to the parasitic capacitance inherent to any non-optical isolation amplifier (parasitic capacitance). The formula used to calculate capacitive reactance (Xc) illustrates this relationship. 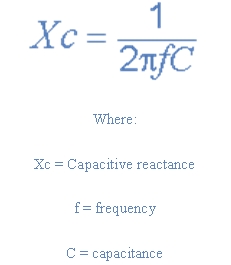 Think of capacitive reactance as the amplifier’s ability to resist noise. As the frequency (f) of the CMV rises, the isolation amplifier becomes less effective. At a certain threshold frequency the CMV is no longer blocked by the isolation barrier, but effectively coupled through it because of the barrier’s inherent parasitic capacitance.

We’ve touched on common mode voltage and how its magnitude and frequency can degrade the performance of an isolation amplifier. Now we’ll discuss the differential amplifiers ability to reject common mode voltage, a.k.a. its Common-mode rejection ratio (CMRR).

In theory, with identical signals connected simultaneously to the (+) and (-) leads of a differential amplifier, the output should be 0V. In reality, some small voltage will always be present. This is an error voltage that will ride on top of the expected output. A differential amplifier’s CMRR is an indicator of just how much error voltage might be present on the output.

The common-mode rejection ratio is calculated as follows:

So for example, assuming that you have 5V connected to the + and – leads of a differential amplifier and you see an output of 158µV, your CMRR is 90dB.

By arranging the formula, with 5V common to the + and – leads of the amplifier and a known CMRR of 100dB, we know that the output will be ±50µV:

As these examples illustrate, the higher the CMRR, the less common voltage is passed through to the output, resulting in a cleaner signal.

We’ve established that isolation amplifiers do not perform well in the presence of large, high frequency common-mode voltages. Now we’ll focus on eliminating high level, high frequency signals before they ever reach the amplifier.

When connecting signals to your data acquisition instrument, proper shielding can make all the difference in the world. This is especially true when dealing with low level signals, where a little noise can render your data useless.

The shielding inside of a shielded cable is made up of strands of braided aluminum or copper (and sometime foil) that surround the connecting wires, insulating them from environmental noise. A “drain” wire is used to terminate the shield to ground. It is connected on either the sensor OR the instrumentation end of the cable (never both as this could result in a ground loop). Shielding is effective at reducing noise in single-ended or differential applications.

Twisting signal wires together to form a twisted pair is another method used to reduce noise. This is done so that neither wire is exposed to more noise than the other. As a result any noise that does make it to the amplifier is identical on both the + and – leads, and is therefore canceled out.

You’ve arrived at part six of this series because you have noise on one or more acquired analog channels. Using procedures described in Part 1 of the series you’ve determined that the noise is a significant percentage of the instrument’s full scale range and is not attributable to the instrument. Further, you have determined that your instrument is not isolated, or at least does not provide both input-to-output and channel-to-channel isolation. Given this last fact, it is almost certain that your noise is caused by a common mode voltage.

It should be clear from the above that the elimination of common mode voltages leads directly to the elimination of noise. How you do that will be different in almost every situation, but realizing that the term “ground” is strictly relative, and that any given set of grounds are almost always at different potentials is a great starting point. Follow these tips to eliminate noise-inducing common mode voltages:

If you’ve examined your field wiring for all of the above and still cannot solve the problem, then you may have to toss in the towel and move to an isolated instrument that is largely immune to the problems caused by a CMV. Depending upon your application, you may be surprised at how little isolation costs, how much time it saves you, and much your measurement improves.