Wireless fidelity, also know as WiFi, is a term used to describe wireless networking technology. Instead of using cables to move data through an Ethernet network, WiFi uses radio waves, eliminating the need for a physical connection to send and receive data. This allows multiple users to connect to the internet, a local area network or any other WiFi enabled product without the limitations of being tethered to a CAT-5 Ethernet cable.

The IEEE (Institute of Electrical and Electronic Engineers) has set three standards in the area of wireless technology; 802.11a, 802.11b and 802.11g (with a fourth 802.11n high speed standard pending). These standards relate primarily to speed (data transfer rates), frequency and range.

Click on the chart for a closer look. Chart courtesy of Linksys

By now you're probably wondering what this has to do with data acquisition. Although WiFi devices are used primarily as wireless Internet or LAN access points, their applications are far ranging. A WiFi network can be used to access a DATAQ Instruments' Ethernet device from up to 150 feet away! WiFi capability allows you to monitor your WinDaq data from virtually anywhere in the building without the bother of running back and fourth or laying cable, all for around $150. 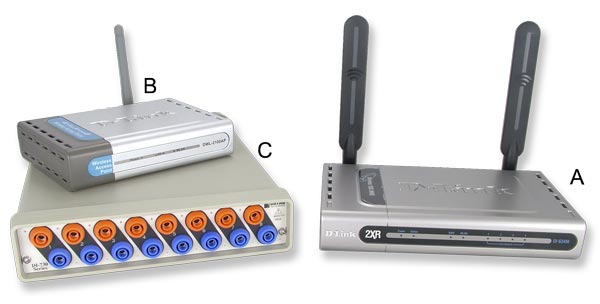 For our test we used a DATAQ Instruments DI-730EN along with a D-link 802.11g DI-634M Wireless Broadband Router and a D-link DWL-2100AP Wireless Access Point.

That's all there is to it! In a matter of minutes you can be up and running at sample rates as high as 186,000 samples per second with little or no help from your network administrator. So take a few minutes out of your day, set it up, and enjoy the convenience of wireless data acquisition.

To further illustrate the capabilities of wireless data acquisition, we'll take a look at one such wireless network being used by The University of Akron in Akron, Ohio. As part of The Society of Automotive Engineers, a group of engineering students at The University of Akron take part in a project that requires them to design and fabricate small formula-style cars. These cars are then entered into a national competition against designs from other schools and judged based upon design and performance. 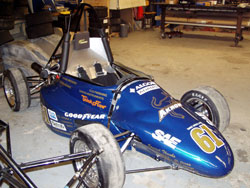 One of the cars designed and built by engineering students at The University of Akron (click on photo for enlarged view).

To optimize the performance of their cars, students at The University of Akron use wireless data acquisition technology to monitor on-board data while the cars are on the track. For example, one such measurement is shock absorber travel, measured using linear potentiometers. This data is collected using a DATAQ Instruments DI-720EN and is then transmitted via an SMC Networks wireless access point to a laptop computer. The data is then reviewed and analyzed using WinDaq software. The students are able to receive and record their data (at a sample rate of 100 cycles per second × 5 channels) from up to 1000 feet away in the open, outdoor environment with the aid of a parabolic WiFi dish antenna. Virtually any measurement, from engine temperature to fuel level, can be received and recorded in real time.

Rear view of a DATAQ Instruments DI-720EN mounted inside one of the cars (left) and the SMC wireless access point mounted atop the engine (right). Click on photos for enlarged view.

The data collected using wireless data acquisition technology can prove invaluable to the engineering students when it comes to making adjustments to improve the performance of their cars. Rather than the driver sensing a problem and making a hit or miss adjustment to correct it, precise adjustments can be make based on the real-time track data.This is just one example of the cost effective power and convenience of wireless data acquisition.