As seen in Desktop Engineering, May 2001

You spend all day slaving over charts and numbers. It's nice to get away from work and enjoy yourself. Maybe you'll take in a baseball game. At least data acquisition won't be able to find you there... or so you think.

You'd be wrong if you were planning to spend the evening at SAFECO Field in Seattle.

SAFECO Field is equipped with a state-of-the-art, rubberized sheet metal retractable roof. The roof consists of three panels that nest on top of one another when the roof is open, and was designed to cover

but not enclose the ballpark, thus preserving an open-air environment. The structure covers nearly 9 acres, weighs 22 million pounds and contains enough steel to build a skyscraper 55 stories tall. The three movable panels glide on 128 steel wheels powered by 96 ten-horsepower electric motors. The roof spans 665 feet when closed. At its highest point, the roof is 215 feet above the field. A push of a button closes or opens the roof in an average of 10-20 minutes (depending on wind and other weather conditions). It is self-grounded (in the event of lightning strikes) and is designed to withstand 6-7 ft. of snow and sustained winds of up to 70 mph.

So what does this amazing structure have to do with data acquisition? Plenty.

A structure this mammoth needs to be carefully watched to maintain its safety. There are eight dampers in the roof of SAFECO Field (two attached to each of the outside panels and four to the center panel) that act as shock absorbers. They absorb the affects of wind, seismic activity and the weight of the roof. Engineers knew that these dampers had to be kept in the best possible condition. To accomplish this, the first option they came up with was to have an extra damper. Each year, one of the dampers would be removed and replaced with the extra damper. Then the removed damper would be refurbished and the following year, that damper would replace another. This would continue year after year. In eight years, each damper would have been replaced, whether it needed to be or not, at a cost of over $200,000 a year. The second option the engineering team came up with was much more cost effective and conceivable.

And it involved DATAQ Instruments.

They decided they would need a monitoring system for these dampers. If they could monitor the performance of the dampers without removing them from the structure, they could save the considerable expense involved with unnecessary testing. The system they envisioned to satisfy this requirement involved an array of data acquisition equipment connected to strategically positioned sensors in and around the structure to provide continuous performance checks.

On each damper, they attached a strain gage and a displacement transducer. In addition to that, a tri-axial accelerometer is attached to the panel itself. These signals are fed to a DI-75B backpack that contains 5B-style signal conditioning modules to provide amplification and isolation. The DI-75B is connected to a DI-720. The DI-720 has an Ethernet interface connected to a radio transmitter which sends the information to a control room at a transmission rate of one million bits per second. 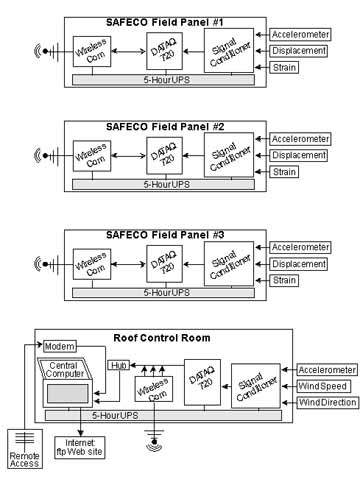 Because the goal of all of this data acquisition is to predict when a damper is failing, it is important to measure any other factors that may play a role in their performance. It may appear that a damper is struggling when in reality there were strong winds or seismic activity they were reacting to that day. Because of this, there is another DI-720 in the control room that is attached to equipment that measures seismic activity, wind speed and wind direction. Then, if it appears a damper is failing, they can cross reference to see what else might have played a part. (See how DATAQ's acquisition system captured the Seattle earthquake.)

The receiver located inside the control room demodulates the three transmitted signals from the data acquisition systems located on each of the three panels. These three signals, in addition to a fourth generated from the data acquisition in the control room, are delivered to an Ethernet hub. The single output of the hub is then connected to the central computer. The computer uses WinDaq Pro software to show four windows, one for each of the station's readings. Each station has a unique IP address that allows the computer to run those four windows and keep straight who it's communicating with. These readings are taken 24 hours a day with a five-hour uninterruptible power supply back-up. Each 24 hours, the Advanced Codas utility compiles the four readings into one file and stores it for later analysis. In addition, PC Anywhere is installed in the control room. This utility allows remote access to current and past readings from any computer located anywhere in the world. This also allowed DATAQ Instruments to better assist with the start-up process and with technical questions, since engineers at DATAQ's facility in Akron, Ohio, could access files and make changes without actually having to be at SAFECO Field.

So, with all this acquired data, how will the SAFECO Field engineers know when there's a problem?

Data acquisition helps SAFECO Field maintain a safe environment. Monitoring dampers instead of unnecessary testing not only saves money, but also saves the field from a possible disaster. Let's say that this option wasn't available at SAFECO Field... They would have probably gone with option one: replacing one damper every year. But what if it's damper #5's turn to be replaced when damper #7 is the one failing?