A Closer Look At The Advanced CODAS Moving Average Algorithm

The moving average is a simple mathematical technique used primarily to eliminate aberrations and reveal the real trend in a collection of data points. You might be familiar with it from averaging noisy data in a freshman physics experiment, or from tracking the value of an investment. You might not know that the moving average is also a prototype of the finite impulse response filter, the most common type of filter used in computer-based instrumentation. In cases where a given waveform is cluttered with noise, where a mean needs to be extracted from a periodic signal, or where a slowly drifting baseline needs to be eliminated from a higher frequency signal, a moving average filter may be applied to achieve the desired result. The moving average algorithm of Advanced CODAS offers this kind of waveform filtering performance. Advanced CODAS is an analysis software package that operates on existing waveform data files created by first generation WinDaq or second generation WinDaq data acquisition packages. In addition to the moving average algorithm, Advanced CODAS also includes a report generator utility and software routines for waveform integration, differentiation, peak and valley capturing, rectification, and arithmetic operations.

DATAQ Instruments' moving average algorithm allows a great deal of flexibility in waveform filtering applications. It can be used as a low-pass filter to attenuate the noise inherent in many types of waveforms, or as a high-pass filter to eliminate a drifting baseline from a higher frequency signal. The procedure used by the algorithm to determine the amount of filtering involves the use of a smoothing factor. This smoothing factor, controlled by you through the software, can be increased or decreased to specify the number of actual waveform data points or samples that the moving average will span. Any periodic waveform can be thought of as a long string or collection of data points. The algorithm accomplishes a moving average by taking two or more of these data points from the acquired waveform, adding them, dividing their sum by the total number of data points added, replacing the first data point of the waveform with the average just computed, and repeating the steps with the second, third, and so on data points until the end of the data is reached. The result is a second or generated waveform consisting of the averaged data and having the same number of points as the original waveform. 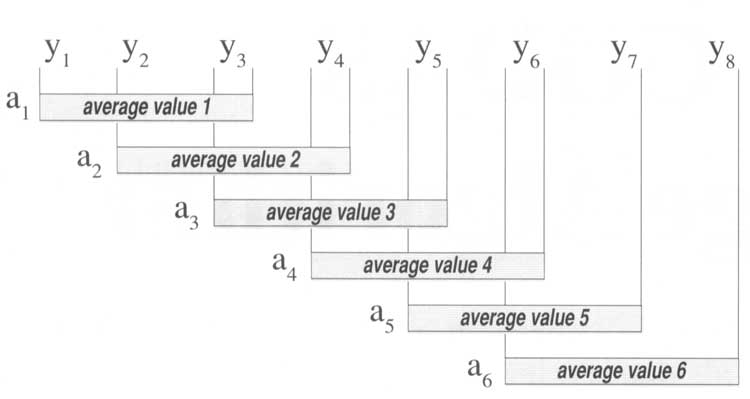 Figure 1 illustrates how the moving average algorithm is applied to waveform data points (which are represented by y). The illustration features a smoothing factor of 3, which means that the average value (represented by a) will be calculated over 3 consecutive waveform data values. Note the overlap that exists in the moving average calculations. It is this overlapping technique, along with a special beginning- and end-point treatment that generates the same number of data points in the averaged waveform as existed in the original.

The way the algorithm calculates a moving average deserves a closer look and can be illustrated with an example. Say we have been on a diet for two weeks and we want to compute our average weight over the last 7 days. We would sum our weight on day 7 with our weight on days 8, 9, 10, 11, 12, and 13; and then multiply by 1/7. To formalize the process, this can be expressed as:

This equation can be further generalized. The moving average of a waveform can be calculated by:

Figure 2* — The load cell output waveform shown original and unfiltered in the top channel and as an 11-point moving averaged waveform in the bottom channel. The noise appearing on the original waveform was due to the intense vibrations created by the press during the packaging operation.

A salient feature of the moving average algorithm is that it can be applied many times to the same waveform if necessary to get the desired filtering result. Waveform filtering is a very subjective exercise. What may be a properly filtered waveform to one user may be unacceptably noisy to another. Only you can judge whether the number of averaged points selected was too high, too low, or just right. The flexibility of the algorithm allows you to adjust the smoothing factor and make another pass through the algorithm when satisfactory results are not achieved with the initial attempt.

The application and capabilities of the moving average algorithm can be illustrated best by the following examples.

In cases where a given waveform is cluttered with noise, the moving average filter may be applied to suppress the noise and yield a clearer picture of the waveform. For example, an Advanced CODAS customer was using a press and a load cell in a packaging operation. Their product was to be compressed to a predetermined level (monitored by the load cell) to reduce the size of the package required to contain the product. For quality control reasons, they decided to monitor the press operation with instrumentation. An unexpected problem appeared when they began viewing the real-time load cell output. Since the press machine vibrated considerably while in operation, the load cell's output waveform was difficult to discern because it contained a large amount of noise due to the vibration as shown in the top channel of Figure 2. This noise was eliminated by generating an 11-point moving averaged channel as shown in the bottom channel of Figure 2. The result was a much clearer picture of the load cell's output.

An Application in Eliminating Baseline Drift

Whatever the application, the universal reason for applying a moving average filter is to "smooth out" the high and low aberrations and reveal a more representative intermediate waveform value. When doing this, the software should not compromise other features of the original waveform in the process of generating a moving averaged waveform. For example, the software should automatically adjust the calibration information associated with the original data file, so that the moving averaged waveform is in the appropriate engineering units when generated.