For nearly 20 years the Glassy-winged Sharpshooter had flown under the radar of California wine makers. That is until it began to spread throughout southern California and northward. Now the very mention of the half inch long insect sends chills down their spines.

Thought to have entered southern California as eggs deposited in plant tissue, the Glassy-winged Sharpshooter (Figure 1) first appeared in Ventura county in1990. The leafhopper, commonly found in the southeastern United States, quickly infested a large portion of southern California and began its march northward into central California - wine country. It was there that the Glassy-winged Sharpshooter’s potential to wreak havoc became clear. 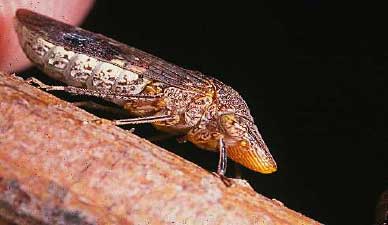 The real threat is Pierce's disease, an incurable plant ailment caused by the bacterium Xylella fastidiosa. The bacterium ultimately blocks plant vessels, preventing the free flow of water and nutrients. Once infected, a grape vine will wither and die within a year or two. Although present in California for more than 100 years there had never been a carrier that could transport the disease more than a few feet. That all changed with the introduction of the Glassy-winged Sharpshooter.

The Glassy-winged Sharpshooter can attain the Xylella fastidiosa bacterium from infected plants and spread it to healthy plants while feeding. Once infected, the bacterium remains in the insects mouthparts for life. With the ability to fly over a quarter of a mile and its relatively long lifespan (6 months or more) the Glassy-winged Sharpshooter is a California wine maker's worst nightmare.

The potential threat is enormous. The wine industry had a $45.4 billion impact on the California economy in 2002 (Wine Institute and California Association of Winegrape Growers).

Efforts to Reduce the Impact

Researchers in California set out to reduce the impact of the Glassy-winged Sharpshooter. Knowing that plant infection occurs as the Glassy-winged Sharpshooter feeds, researchers needed to gain a detailed understanding of this process. Based on research previously conducted on other Sharpshooter species, it was decided that this process could best be studied by monitoring what are called electrical penetration graph (EPG) waveforms. Observing these EPG waveforms, synchronized with video images of the Sharpshooter feeding, researchers were able break down the process step by step (Joost, Backus et al, 2006).

In order to produce EPG waveforms researchers use a silver conducting paint to "glue" a 50µm diameter, 1.5cm gold wire to a Sharpshooter's body. When the sharpshooter inserts its stylet (mouthpart used to penetrate plants) into an electrified substrate, a current path is created. To accomplish this task, the Sharpshooter is placed into a diet chamber.

The diet chamber (Figure 2) consists of a Plexiglas enclosure divided in two by a Parafilm partition (acting as artificial plant medium). The Glassy-winged Sharpshooter is positioned on one side of the partition and a sugar-water solution is added to the other. The gold wire, "glued" to the Sharpshooter, is connected through an EPG amplifier to the DI-720. A wire conveying a substrate voltage of between 50 and 80mV is then placed into the sugar-water solution.

As the Sharpshooter's stylet pierces the Parafilm partition and the insect begins the process of feeding, unique waveforms are generated as a result of fluctuations in resistance (R = V / I). At the same time a CCD camera records images the process through a stereomicroscope (Figure 3). This allows researchers to associate unique EPG waveforms with each step of the feeding process (Figure 4).

Figure 4
(A1) Stylet probing begins. (B1) Secretion of saliva is observed (B2) The maxillary stylets are rapidly extended and retracted. (C) Fluid uptake (suction) was observed.

This detailed understanding of the feeding behavior of the Glassy-winged Sharpshooter will go a long way toward helping researchers determine the exact point at which Xylella fastidiosa infection occurs. Together with other studies relating to the control of Pierce's disease, it is hoped that a host plant resistance can be found.