The electromyogram (EMG) is an example of this latter application. When a muscle is contracted, a small electric potential is produced. Surface electrodes can sense this muscle activity potential when placed over the muscle. The signal detected by the electrodes is amplified and recorded with instrumentation, and is known as the EMG. To the researcher, the EMG signal is virtually meaningless "as is." However when the signal is analyzed, a measure of work done by the muscle, called an activity index, can be derived. In practice, an activity index for a specific muscle is established as a benchmark. This benchmark is then compared to another activity index of the same muscle, but generated under a different set of conditions (such as after fatigue, or after the administration of a drug, etc.). This comparison normalizes the activity index and provides a way of measuring the effect fatigue or the drug had on the muscle. The primary tools used to analyze the acquired EMG signal are the rectification and integration functions.

The Advanced CODAS waveform analysis option for DATAQ Instruments' WinDaq data acquisition systems contains the rectification and integration functions that were used for analysis in this application note. 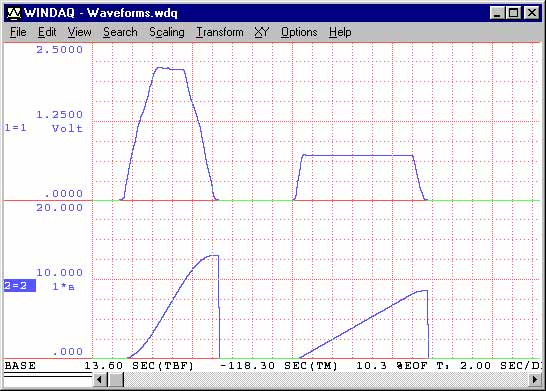 The units that result from an area-under-the-curve calculation are the same as those that would result from any area calculation. For example, the area of a tract of land 85 feet wide by 170 feet long is 14,450 feet•feet, or simply square feet. An area bounded by a curve is no different. A waveform representing volts as a function of time in seconds would carry units of volt•seconds when integrated.

Deriving an activity index from an EMG waveform is a specific application of the integral. The following example illustrates how the rectification and integration functions of Advanced CODAS are applied to an EMG channel to derive an activity index. The EMG signal shown in Figure 2 was obtained from a bioelectric amplifier connected to a pair of surface electrodes placed several centimeters apart over the biceps muscle. The signal was acquired with a WinDaq data acquisition system installed in a Toshiba Portable personal computer. The output of the bioelectric amplifier was connected to the input of the WinDaq board through an option 01 module and a total gain of 1000 was applied using the live, interactive program capabilities of WinDaq acquisition software. A sample rate of 1000 samples per second provided better than 100Hz response. This is similar to the best response that could be achieved with a pen-type oscillographic chart recorder. Figure 2 shows the acquired EMG signal with a compression factor of 16 applied, equivalent to slowing down a chart recorder's paper speed by a factor of 16. 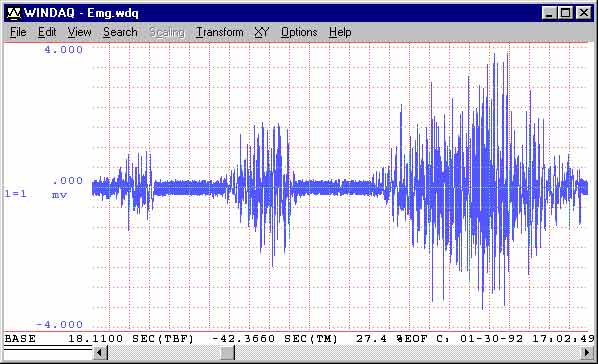 Figure 2 — The original EMG signal acquired by skin surface electrodes placed several centimeters apart over the biceps muscle. Other than the duration and intensity of the muscular contraction, the waveform conveys little meaningful information in this state. 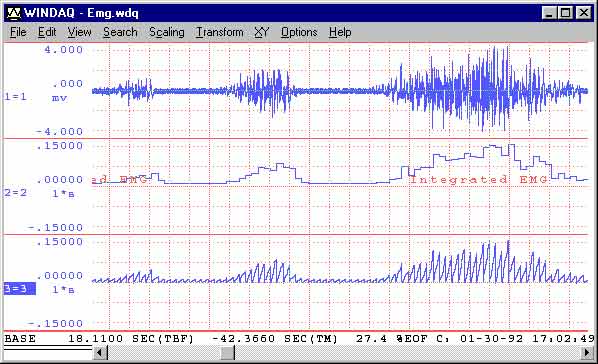 From the original signal (shown in Figure 2), the absolute value or full-wave rectified waveform can be derived. Applying the absolute value function to a waveform folds the negative portion of the signal above zero reference to join the positive half of the signal. Full-wave rectification is desirable in this case since we are interested in knowing the total amount of energy (both positive and negative) contained by the waveform. Applying half-wave rectification would result in a positive only or negative only energy evaluation.

When this is done, you may notice a noisy appearance in the baseline. This noise is typical of an EMG waveform and should be removed before integration. Our next step would be to eliminate this baseline noise and achieve a standard or normal form of the signal. This can be done so subsequent comparisons with other normalized signals will reveal the difference in muscle performance rather than differences due to noise levels. The unwanted baseline noise can be removed by shifting the rectified signal below zero reference (just enough to submerge the band of noise under zero), re-establishing zero at the baseline, and then taking the positive half-wave rectification of the re-zeroed signal. By taking the positive half-wave rectification of this re-zeroed signal, all portions of the signal below the zero reference line (the noise) will be blocked out. It should be noted that this step is really not necessary for integration. The integration function of Advanced CODAS supports rectification directly, but it does not display the rectified signal as an intermediate result. Our reason for presenting the rectified signal is to document the steps involved in an EMG analysis.

The top channel of Figure 3 illustrates our objective, the activity index waveform derived from the original input signal. This waveform is scaled from 0 to 0.1 millivolt•seconds, has a peak value of 0.07824 millivolt•seconds, and at any 100 millisecond interval has a discrete value that is directly related to the original signal less noise. The integral was reset every 100 milliseconds (or every 100 samples) and the "sample/hold" before reset function was enabled.

By itself, one integrated EMG waveform is of little or no value in evaluating muscle activity. However when compared to a similarly evaluated EMG waveform, it is easy to tell which case represents the greatest amount of work done by the muscle. If you are interested in analysis beyond just the peak integral value, the powerful statistics function of WinDaq may be applied to further analyze and interpret the waveform data. The statistics function derives statistical information from the waveform, such as: number of data points contained in the waveform, mean value, standard deviation, minimum value, median value, maximum value, rms, sum, sum of squares, variance, and skewness.