It was a good, long run, but the strip chart recorder our customer had used for years was finally being replaced with a state-of-the-art PC-based data acquisition system. The recorder had become unreliable, and the paper records were tedious to analyze, and difficult to archive. The only problem was selecting a new instrument that combined the simplicity of the chart recorder with the flexibility of contemporary instrumentation.

The application for monitoring the performance of the DC motors used to open and close the glass roof appeared straightforward on the surface: Monitor motor DC voltage and current over time. However, current was to be measured using a current shunt (1mV/amp) and therefore defined a product with isolation and high gain. Measurements were to me made both in the lab and in-vehicle, so the selected instrument would need to be DC-powered. Scalability was also important, since our customer wanted to expand into temperature measurements in the near future. Finally, the customer could envision the need to network the new data acquisition system so acquired data could be made available on their intranet both during and after a test. For example, the test engineer wanted to be able to view the performance of a test from the convenience of his office, in real time, whenever he desired.

All these prerequisites were satisfied by DATAQ Instruments DI-730 data acquisition hardware running WinDaq software. Here's how the DI-730 matched up by requirement:

The DI-730 was put into service and yielded better that expected results. Since the replaced strip chart recorder had a limited frequency response, results provided by the DI-730/WinDaq software combination (see Figure 1) revealed the spiky nature of the current waveform caused by large in-rush currents when the motor is initially activated. These high frequency spikes were virtually hidden in the paper recorder's record. 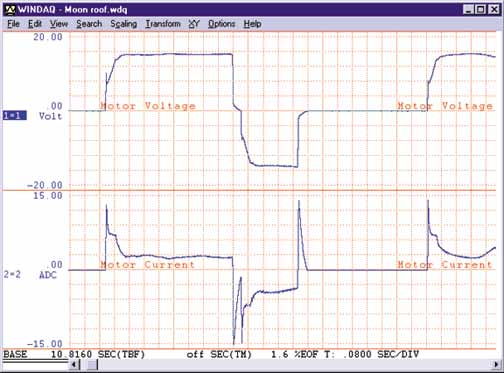 Figure 1 — A typical output from WinDaq software when connected to the moon roof motor through DI-730 data acquisition hardware. Notice the spikes on the current waveform that were virtually hidden on the strip chart recorder output.